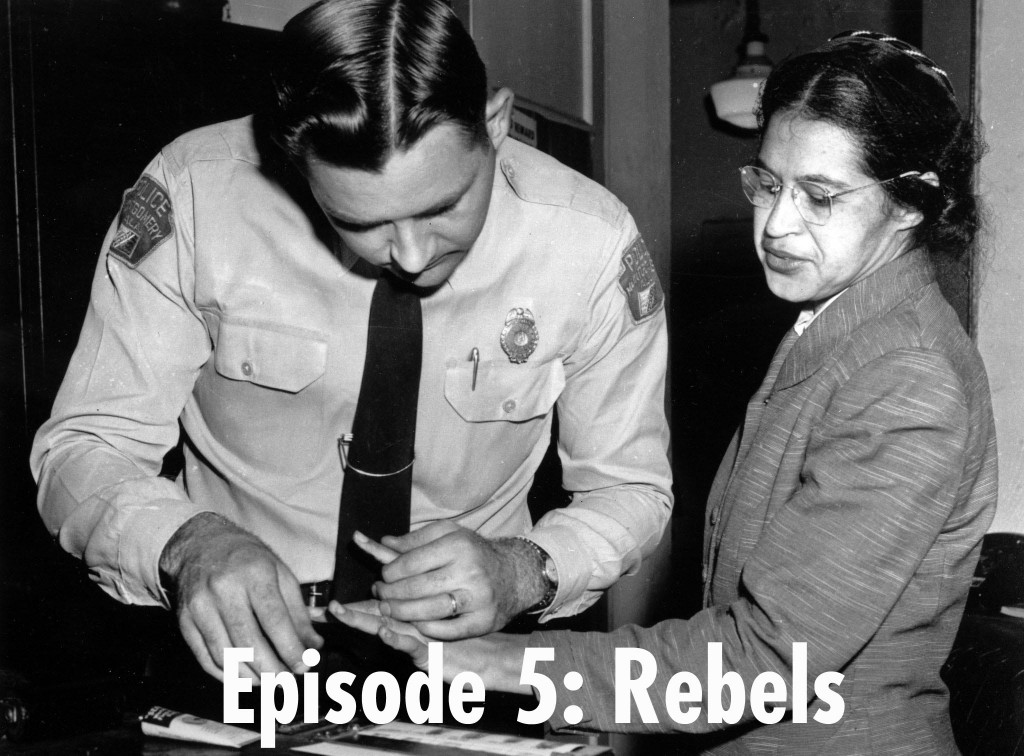 The rebel. You’d think that a culture that gave us John Brown, Margaret Sanger, and Rosa Parks would be more encouraging of this proud American tradition. This week we examine why rebels get the short end of the stick. We talk with historian Jeanne Theoharis about how Rosa Parks’s rebellious life has been swept under the carpet of modern American history, examine Pussy Riot’s rebellious legacy with many of the band’s supporters, and chat with a rebel journalist about a mysterious shooting in Missouri and the pros and cons of assumption.

Have you heard the tale of Robbie the Rebel? We all know him to some degree. One last exiguous belch from the 20th century. But in this nine minute performance of an allegorical tale of a rebel emerging from the dregs of the 20th century, we establish a template for this program. (Beginning to 9:43)

Times Square was once devoted to go-go bars, adult theaters, and other rebellious fixtures of New York City. But in 2013, rebellion is more of a commodity. In these series of street conversations, we ask people to tell us the most rebellious thing they have ever done. Some of our subjects are adamantly against rebellion. Others are on the fence. By sheer fluke, many of the people included in this segment are from the United Kingdom, and those from across the pond are more committed to spilling the rebellious beans than Americans. (9:43 to 13:03)

Callion Hamblin and the Case of the Rebel Journalist

In 2010, novelist Frances Madeson moved to Farmington, Missouri and became the editor and publisher of The Madison County Crier, where her rebellious take on the local biweekly newspaper proved alluring yet controversial. Madeson doesn’t see herself as a journalist, but a literary artist. In recent months, Madeson has concerned herself with a St. Louis Post-Dispatch story about Callion Hamblin, a 32-year-old man on the run from police and bounty hunters and killed by the police during the early morning of February 20, 2012. Madeson believes the story to adhere to an official narrative that must be resisted. But because the facts aren’t all in, Follow Your Ears questions Madeson’s approach and engages in an unexpected examination of journalism vs. literary artistry, talking with Hamblin’s ex-wife and the local coroner, and wondering if rebel journalism is all that it’s cracked up to be. (13:03 to 38:28)

(Shortly after this program aired, the Associated Press’s Alan Scher Zager filed a new story on Callion Hamblin, with statements from the county prosecutor and more details about the autopsy report.) 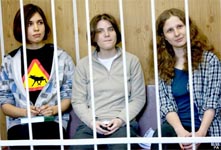 On February 21, 2012, one day after Callion Hamblin was shot in Missouri, Pussy Riot performed “Punk Prayer” at Moscow’s Cathedral of Christ the Savior to protest the Orthodox Church leader’s support for Vladimir Putin during his reelection campaign. Three members of Pussy Riot were arrested weeks later and held without bail, kept in custody on charges of hooliganism. Two of the three members were sentenced to two years in a penal colony, with this gross injustice attracting notice and support from around the world. During the print release of Pussy Riot: A Punk Prayer for Freedom, we talk with Feminist Press editorial director Amy Scholder, Zena Grubstein, producer for the documentary Pussy Riot: Punk Prayer, poet Eileen Myles, Laurie Weeks, Johanna Fateman, Barbara Browning, and Elizabeth Koke to learn more about how Pussy Act’s brave act of rebellion impacted the world at large. (38:28 to 47:16) 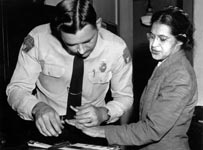 The historians and the statesmen describe Rosa Parks as a meek seamstress who boarded a segregated bus after a long and tired day of work on December 1, 1955. She refused to give up her seat to a white passenger when asked and, through one act of defiance, changed the course of civil rights. But as historian Jeanne Theoharis points out in her new book, The Rebellious Life of Mrs. Rosa Parks, Rosa Parks wasn’t nearly as quiet as history has painted her. (47:16 to end)