Giving aid to nations and people who desperately need help has been an American staple for more than a century. Yet in 2013, aid has become more beholden to red tape and incompetence than ever before. This week, we go to Staten Island to talk with the organizers and volunteers of Occupy Sandy to find out how they helped people when others could not and get a sense of their philosophy. We talk with Jonathan Katz, the only full-time American journalist stationed in Hatii during the 2010 earthquake and reveal how billions of dollars given by Americans to help the impoverished and the homeless ended up in the wrong place.

The Very Mass of Facts

On June 5, 1947, Secretary of State George Marshall said in his speech that “the very mass of facts presented to the public by press and radio make it exceedingly difficult for the man in the street to reach a clear appraisement of the situation.” But here at Follow Your Ears, we’d like to give a shot. (Beginning to 1:35)

Occupy Sandy emerged in the aftermath of last year’s hurricane. Aid wasn’t moving fast enough. So Occupy Sandy stepped in and has been hard at work ever since. We made a visit to Staten Island to spend some time with some of the people behind this relief effort. We chronicle the origins of Occupy Sandy, its philosophy and functional ethos, learn how volunteers juggle their time, and peek in on a “data entry party,” where hard won and carefully collected data from a neighborhood canvassing campaign is being placed into a computer so that other individuals and organizations can find new solutions. (1:35 to 14:26) 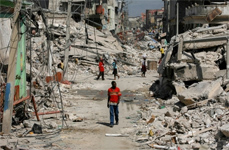 Haiti — The Truck That Went By

Jonathan Katz was the only full-time American correspondent in Haiti when the devastating earthquake hit in 2010. His new book, The Big Truck That Went By, documents what happened in the quake’s aftermath and reveals how, despite $15 billion in donations, the aid didn’t always find its way to the people of Haiti. We learn discover how aid has greatly harmed the Haitian health services infrastructure, reveal how Bill Clinton’s best intentions are often guided by inflexible neoliberalism. (14:26 to end)

Loops for this program were provided by Joe Funktastic, hamood, The Psychotropic Circle, and builtmymusic.